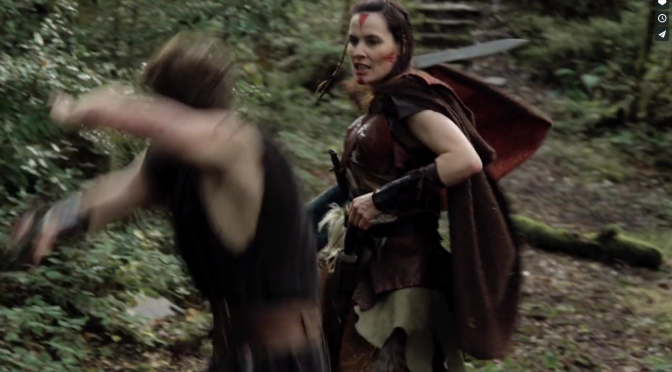 Ok ok sorry its been so long but I will make up for it with the things to post!

Ok lets rewind back to May! The online game Clash of Kings had a massive promotion in London which involved 3 armies, lava monsters, barbarians all in the centre of London in the shadow of Tower Bridge. It was quite a spectacle and something you don’t see everyday especially in central London! Armies marching over Tower Bridge with banners flying and cheering warriors going into battle. I played the Queen in charge of the Blue Army who teamed up with the King of the Red Army to defeat the evil King of the Black Army. It was loads of fun and loads of media coverage on the day. Check out this video that was streamed online the day after the event. 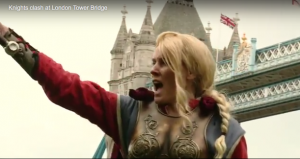 Filming Sean and I did on the daytime soap Doctors was aired early June on BBC1, the episode called Slings and Arrows saw 2 rival darts teams going head to head in the final of a competition. I played one of the darts players in the ladies team, a small featured role which was really fun to do.

A couple of years ago Sean and I attended an event for RAF Brize Norton for their family fun day.  Alongside a couple of our UK Garrison friends who were dressed as Darth Vader and a Stormtrooper, Sean and I went as Xena and Jack Sparrow. We filmed some of the highlights and Sean has eventually got around to editing it together. Here is the link and check it out!

July saw me return to the city of Hull to film another installment of the saga Humber City. This particular shoot was really nice to do as we had most of the main cast in the scene. Such a pleasure to work alongside these guys, other than being lovely people,  the dynamics of the characters everyone brought to the scene and everyones professionalism made it a really great scene. I shall be heading back up to do some more filming next month, and hopefully it is now coming to an end and all filming should be all done by September! 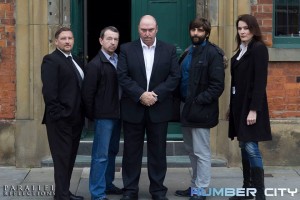 More filming, this time a documentry called The Private Lives of the Tudors which was aired on the Yesterday Channel. Filmed this a while ago earlier this year I ended up playing Queen Elizabeth I showing her not so good side. The Queen used many things to try and make herself look youthful like lead based makeup and used honey to clean her teeth! I think it goes without saying they may not have been the best things to have used! So I went through a couple of hours in make up having a bald cap put on, blackened teeth and  scaring to show what the Queen actually looked like underneath all her makeup and wigs! Mmmm sexy! 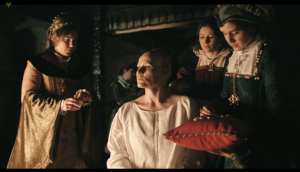 The lovely annual Open Day at the ABC Animal Sanctuary was upon us again. Only one day this year not the usual 2 but it was still a great day, more so as this year we were joined by a couple of old costuming friends we hadn’t seen for a while so it was great to catch up with them and spend a lovely relaxing day helping raise much needed funds for the charity. Weather was lovely and I helped with parading one of the lovely Shetland Ponies called Jack. 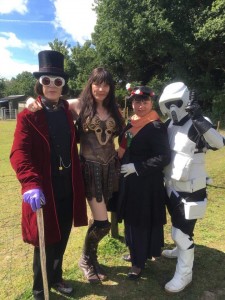 For those of you who do follow this page you may remember me landing a role in a film back in September last year for a film called Chariot. A film about Ben Hur following his life after the chariot race. I played a celtic warrior mercenary that was part of a group of mercancaries hired to capture Ben Hur. The photo at the top of the post is a screengrab from the trailer and here is the link to the trailer, will find out when it is due to be released and let you know.

Well during the month of June and July I have been very busy making my new costume Captain Phasma from the new Star Wars film The Force Awakens. I was aiming to get it done for the huge event at the Excel in London – Star Wars Celebration Europe, the biggest Star Wars event that is held all over the world and on this occassion it was the turn of London, the last one here was in 2007. After much blood, sweat and tears I managed to get her done just in time. I was still doing minor alterations up until lunchtime on the first day (Friday) but I got to the point of its now or never and without having a chance to try it on beforehand. Well I can thankfully say she held together with just a few minor repairs along the way! The response from other 501st members and the public was overwhelming she came she saw and she conquered! She went down an absolute storm and as I was the only Captain Phasma there that made it even more special. She will be on patrol again in the near future!

Well thats it for now I promse I won’t leave it as long as last time for the next one! 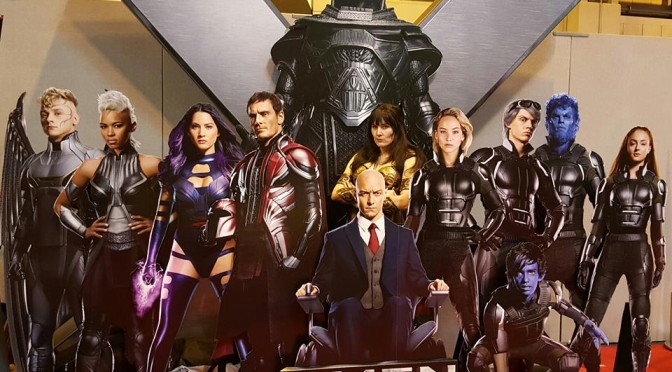 Back again! So where to start, ok back in March I joined Sean on his sponsored walk in aid of Moorfields Eye Hospital as a thank you for all the amazing treatment he has received since his serious eye injury. He raised over £550 pounds which was an awesome achievement and he did it dressed as Captain Jack Sparrow! The weather was beautiful and the walk was a lot of fun. Sean has still a little way to go with his recovery but h is doing great and the surgeons are very happy with his progress.

The MCM Memorabilia event at the NEC happened in March in which Sean and I attended as we regulary do as Xena and Jack Sparrow.  Alongside the UKG it was the usual exhausting but fun event and meeting up with good friends. Here Xena is dealing with a dodgy looking character, aka the awesome Heisenburg lookalike Jamie Pagett.

Easter holidays I went to the Childrens Festival event helping the children with the craft activities making roman mosaics. Here is one of my creations!

Beginning of April saw Sean and I heading back to Hull for some more filming on the drama Humber City, I have another few days coming up in June so will keep you posted.

St Georges Day saw a few events kick off, first was at Wentworth Golf Club for a large charity event for British Airways. For this we were dressed as Medieval Knights in full armour greeting people as they entered the building.

This month saw a couple of Stormtrooper events, one at a store opening in the Midlands and one at a Star Wars themed Wedding in Dorset. Both events went down realy well and the Wedding was a lovely relaxed event in beautiful surroundings. Here little baby Benji wearing his stormtrooper baby grow and chilling with the stormtroopers!

Early May Bank Holiday there was an event, ‘Roman Rampage’ at the English Heritage site Old Sarum in Wiltshire. I was there making an appearance as Queen Boudica and riding around on a chariot! It was a great event even though the weather wasn’t the best it was still a realy enjoyable event to do. I performed in the main arena talking about the story of Boudica and we used the chariot in the display as well. Even though the chariot I was on wasn’t an Iron age one it still looked amazing with the 2 beautiful black horses Flo and Nimbus. It really gave the audience a feel to what it must have been like to come face to face with on the battlefield. Photo to follow!

I just had 2 days on a new big action adventure movie as a supporting artist. Was a really fun couple of days, the film isn’t due out until this time next year but I think you will get a glimpse of me next to the star!

Can’t say much else about it but will mention it again nearer the time as a reminder.

Well thats it for now, keeping busy with 2 new costumes for myself which I have a deadline for. Got a fun event next week which I will report on next time.  Thank you for your interest