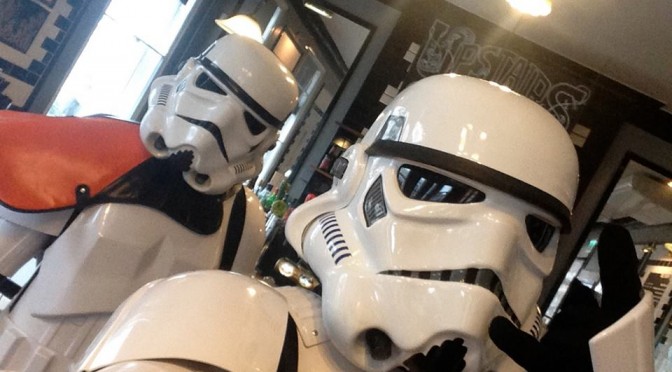 As always this time of year things go a little quiet work wise, though I have been making a few things and have a few things in the pipeline.

First off since the last posting Sean and I have done 3 stormtrooper jobs, one which was filming for an internal film for a tobacco company so unfortunately it won’t be seen publicly. Only thing to show is the photo above of Sean and I just after filming. It was funny filming in a newsagent in London with unsuspecting customers walking in!

TheTales of Albion film project is almost complete, I was asked back to record some voice over work and a bit of dubbing. Was great to see some of the edited footage on screen as its a couple of years ago when they were filmed. Fingers crossed it will be finished and available in a couple of months. Will update with further details.

February half term saw Sean and I at Jersey to the Maritime Museum for their Pirate Week! Was a lot of fun and one of the highlights for me was to visit the Jersey Celtic Coin Hoarde to see how the conservation was going. The hoarde of coins, gold Torcs and jewellery is so big it is taking several years for them to seperate and record every item! Each time I have seen it is slowly being getting smaller and smaller but there is still a long way to go. 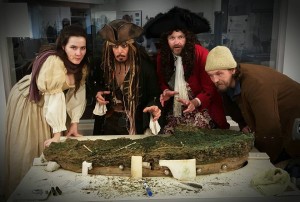 Filming, I did a day on a new Hollywood film with the special effects dept. They have not started filming yet but they were testing out the sand storm effects machine, there was about a dozen of us running around being blown about with big wind machines and different types of fake sand. It was purely for the effects dept to see what worked best so they footage will not be seen anywhere but it was fun to do. Not something you get to do every day!

Still plugging away at the auditions, fingers crossed a cracking role will come my way! Memorabilia in a few weeks in Birmingham so will have a report about that too so please keep checking up on the page.